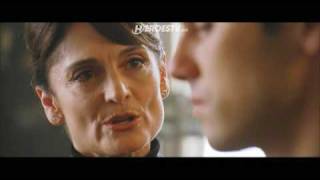 (A young Hiro(seated playing a videogame) and Kaito (standing holding a baby Claire), are outside on the Nakamura apartment rooftop in 1992 as Noah Bennet enters.)

Noah: (clears throught, Kaito turns to face him, Noah bows in respect. Present Hiro and Claire teleport into the apartment, and are observing them from inside a glass door.)

Claire: What did you do? What the hell is going on?

Noah: (in Japanese) We think she died in the fire.

Claire: Dad? (Hiro covers her mouth to be quiet.)

Kaito: (in Japanese) Once again. Not a request. (Kaito hands baby Claire to Noah.)

Claire: That baby's me. You're Hiro Nakamura aren't you?

Claire: Peter told me about you. You're a time traveller, so you brought me back in time. Why did you bring me here?

Hiro: (in Japanese) I don't understand a word you're saying.

Hiro: (in Japanese) Less talking. More watching. (He turns her head looking back outside.)

Kaito: (in Japanese) Don't get too close.

(Hiro notices young Hiro, and points him out to Claire.)

Claire: Is that you? Am I here for you?

Hiro: (in Japanese) Sorrry. I only had one semester English. All I know is...(in English) "Where is train station?"..."I must use toilet."..."one waffle please."

Kaito: (going inside, to young Hiro in Japanese) Hiro, come along.

Hiro: Momma?! (in Japanese) My mommy is here! I have to see her!

Claire: Wait, where are you going? Should I stay with me, or should I go with you? (Hiro doesn't understand and continues down the hall.) Hey, hey what am I supposed to do?

Kaito: (in Japanese) Hiro, not so rough. Your mother is ill.

Ishi: (in Japanese) It's alright.

Kaito: (in Japanese) How are you?

Ishi: (She switches languages.) Our son can hear us, speak English.

Kaito: Are you feeling better?

Ishi: We must face the inevitable. I am dying. I think it will happen tonight. We must make arrangements for the catylst, before it is lost forever.

Hiro: Catalysto. What are they saying? I gate it when they speak in English.

Kaito: Are you sure? Nothing will ever be the same.

Ishi: You must think of the future Kaito.

Kaito: I will have Noah, return with the baby. She is the perfect candidate.

Ishi: I wanted to keep it in the family. (looks at young Hiro)

Young Hiro: (in Japanese) A dove is sick.

Ishi: (to Kaito) This conversation isn't over yet. (Kaito exits room.) What is it Hiro?

Young Hiro: Will he die?

Ishi: Let's see. (they take the dove out of the cage, and she holds it, kisses it, and heals it) Yatta!

Hiro: My Mommy is a healer.

Hiro and Claire simultaneously in both languages: I know what I have to do! I think my mommy can heal my brain!...restore my memory so/I think I can stop the catylst before they put it in me! (both) I can be a hero! I don't understand what you're saying.

Claire: I have to have to follow my dad and protect that baby so they don't inject the catlyst into me. I'll meet you here tonight, stay out of trouble, OK? (she exits)

Kaito: (walking up from being, doesn't see Claire) What are you doing here? You should be in the kitchen. My wife's been waiting for breakfast all morning. Aren't you the new chef?

Kaito: Hurry up then! She wants Tamagoyaki.

Arthur: You were suppose to be here by now, where's Claire?

Sylar: ...and I know exactly where I'm going to find it. (he settles on Sue Landers contact.) i've got a whole new list of people with abilities...it's going to be very useful.

Sylar: Don't worry, I will! Very soon. (hangs up and begins to pour lighter fluid on Elle's dead body.) Goodbye Elle. (He calls forth her ability of Electric manipulation to arc from his finger, igniting her body in flames.)

(Angela, Peter and the Haitian are standing together in the room.)

Angela: (Sets a gun on the desk.) One shot to the back of the head, and it's done.

Peter: You want me to kill him?

Angela: Why do you think I sent you and your brother to find the Haitian? He makes Arthur vulnerable. And now that Nathan has switched his allegience, it's all up to you.

Haitian: Your father is far too powerful. He won't be contained.

Angela: If the tables were turned he would not hesitate to put a bullet in your brain...or Nathan's. Why do you think I poisoned him? The man I loved. Father of my children. He tried to kill your brother, and if you get in his way, he will destroy you.

Peter: You don't know that.

Angela: I know that he will stop at nothing to get what he wants, by any means necessary no matter who gets hurt. There's no other way. (Peter takes the gun.)

Tracy: (To Arthur) So DOD (Department of Defense) is onboard, right? We're all set. (Nathan walks in.)

Nathan: (to Tracy) What are you doing here?

Tracy: It's my job senator...Finding opportunities for you.

Arthur: Have you reconsidered my offer son?

Nathan: I agree with what you're trying to do. The world's a dangerous place and it's not getting any better. We need a leader. Somebody with vision. And that somebody isn't you.

Arthur: Is it you?

Nathan: I'm taking over Pinehearst. The complete program. I'll work out of my office, we can use my resources.

Arthur: Who do you think you're talking too? I made you.

Nathan: You wouldn't have gone to all this trouble to make me, if you didn't need me.

Arthur: Alright Nathan. You win. Brief him on what we've done.

(Nathan and Tracy exist Arthur's office and are walking down a hallway.)

Nathan: What do you expect? You went behind my back. You're supposed to be working for me.

Tracy: That's exactly what I was doing, I'm on your side Nathan. Your father sees the problems of this world: war, terrorism...he wants to make it a better place.

Nathan: You have no idea what my father is.

Tracy: I know he's crossed some lines, but he's a vision for the future, and you're in it as President of the United States. And that is where you belong Nathan, and I belong there with you. (Flint and Knox are shown observing their conversation.)

Tracy: (enters a room through a doubledoor) We'd like to call it intelligent design. Until now abilities have been random, given to good people and bad, whether they deserve them or not. When we perfect the formula, we get to choose who gets what power...and we've chosen the best...meet the future. (she points to the marine recruits, falling into formation, which include Rachel Mills, David Sullivan, Ryan Hanover, and Seargent Scott).